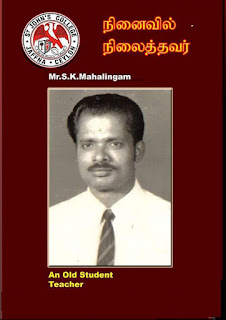 Johnians all over the world were shocked and saddened to hear that S K Mahalingam had passed away recently(2018) in Jaffna. It was a surprise that so superbly fit an athlete, healthy and strong could die so suddenly. It goes on to prove that time and tide await none.

SK as he was affectionately known was one of the finest all round sportsmen St John’s had produced in all its nearly 200 years of existence. He was equally good in cricket, football and athletics. When I was asked to write an appreciation about him for the SJC, OBA bulletin, I was a bit diffident as to whether I could do justice to so great a sportsman and gentleman. But I realised I was one of the very few living in Melbourne who could go back more than 60 years in time and write about SK’s exploits on the playing fields of Jaffna. If there are a few omissions or errors it should be blamed on my memory. But the main facts are correct.

SK’s ability in sports was seen in his early days, but it was in 1952 he came into prominence as a cricketer. He played for the first XI (his first year in the team) and went on to play in 1953 and 1954 (his final year as captain). From the start he was the epitome of what a fast bowler should be. Really fast with amazing control of length and direction, no batsman could take any liberties with him. He could swing the ball both ways and had a rare slower ball which bamboozled many batsmen. Ask anyone from St John’s whom he considered the best bowler the college had produced, the answer will invariably be SKM! He had a perfect action – starting his run up slowly, speeding up half way and with the ideal side on delivery he sent the ball hurtling to the batsman.

1953 was his annus mirabilis. He had some amazing performances which included 8 wickets for 6 against Hindu College. This was a keenly contested match. SJC batted first and in each innings scored around 140 runs. Hindu also made about 140 in their first innings and so had to make about the same amount for a win. But SK just skittled them out for 18! I was watching him during this spell through binoculars and saw the batsmen literally shivering in their boots! His figures should have been 8 for 2 because a sharp catch went though leg slip’s hand to the boundary. At one stage he had 6 for 0! There were other performances like 6 wickets for 3 and 7 for 14.

His bowling performances should not give anyone the idea he couldn’t bat. He was good enough to score a swashbuckling century against Jaffna College in 1952 and made many other significant scores . He was a useful hard hitting batsman with the straight and off drives as his forte. They were so powerful that the ball seemed to accelerate as it sped to the fence. At practice, slow bowlers hated to bowl to him. He used to target the Principal’s bungalow when batting from the William’s Hall end and William’s Hall when batting from the Principal bungalow end. Somewhere in the 1950s, a Tamil Union team went to Jaffna to play a Jaffna side. SK took 5 for 32 in that match. At the end of the match he went to C T A Schaffter, at that time Ceylon’s opening bowler, to ask for some tips. Schaffter said he could not help SK because he already had all the attributes and repertoire a fast bowler needed. I believe SK was offered a chance to go to Colombo and play for the Tamil Union club. He did not take it up. Instead he went to Madras and did his diploma in Physical Education and returned to SJC as a physical instructor.

He started his cricket and athletic coaching in 1957 and continued to do so for more than 20 years. He was also a successful teacher in English. As coach in cricket and athletics, he produced some of the finest cricketers and athletes to represent the college. I don’t want to mention individual names, but the cricket teams were unbeaten year after year. Most Jaffna School cricket sides had more players from SJC than any other school. As already mentioned SK was a superb athlete and footballer. In athletics, he was a sprinter and long jumper. He broke the long jump record for Group 2 Jaffna Schools in 1952. He was also a member of the 4 X 100 yards and 4 X 440 yards relay teams that broke the Jaffna Schools record that year.

In football, he played right extreme. He was a swift and nippy player. The SJC team visited Batticaloa in 1953 to play a few matches against some schools there. SJC won all of them and thrilled the spectators with their agility. Fr Miller, a Catholic priest who was a great sports enthusiast in Batticaloa, dubbed them “footballers from Hungary”! It should be pointed out that Hungary had the best football team at that time. England which had never been beaten in 90 years were humbled 6 goals to 3 at Wembley Stadium and 7 goals to 1 in the return match in Budapest. Fr Miller was especially enthusiastic about SK’s ability to centre the ball from the extreme right into the goal area for the forwards to kick or head a goal. His corner kicks were also spectacular. I have seen some of SK’s corner kicks swerving into the net without touching any player! 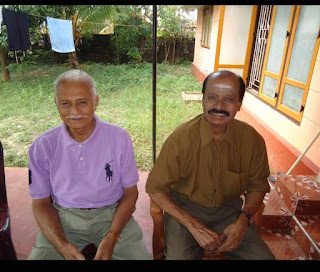 SK had 2 brothers S K Shanmugalingam and S K Paramalingam. They too were all round sportsmen and all 3 Lingam brothers won their cricket, football and athletic colours which were the only colours SJC awarded at that time. I remember those days when those of us living in Chundikuli area, used to play softball cricket during the holidays. The “big match” was between Ariyalai Sports Club and the Rest! Ariyalai had the Lingam brothers and a host of other good players. Even the Rest team had more players from Ariyalai than the rest! Invariably we used to lose those matches, but we managed to tie one game! SK’s bowling with the soft was real magic. With a semi circular run and the ball hidden behind his head, he gave the ball a real tweak that it swerved towards slips and then when it pitched, it darted into the batsman like a spitting cobra. I could hear the ball make a whirring sound on its trajectory and it was a most difficult ball to negotiate. 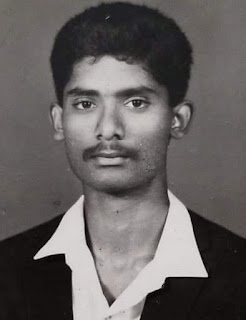 I know very little about SK’s family. He had a son and 3 daughters. The son, Kandeepan was a very good cricket all rounder and captained SJC. The daughters were all good athletes. One of his daughters Kanchana was a classmate of my daughter at CGC and was an excellent netball player too. SK’s students who had learnt from him (English and sports) were very thankful to him. Whenever one of them visited Jaffna (especially from foreign counties) they made it a point to visit him. It was like a pilgrimage to honour their guru! A few years ago, some loyal old boys paid for his visit to England along with his wife. Another expatriate, a friend of mine and himself a sportsman, visited SK recently. He was surprised to find that SK was bed ridden and seriously ill and unable to speak or recognise him. To find a person who was so fit, strong and healthy lying frail and helpless was a shock. A few days later SK was no more, having succumbed to a stroke. It is now time to farewell the perfect fast bowler, a real gentleman who was a good friend and mentor to many. May his soul rest in peace.

1. The lost boys of Jaffna

Popular posts from this blog 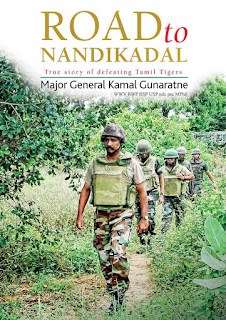 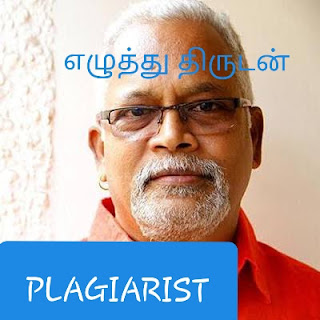 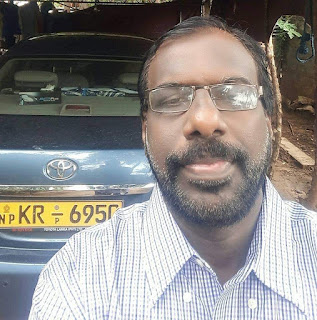